We are a fully licensed waste management company that was started in early 2005.

We can optimise your wastewater treatment chemical usage, get in touch to find out more.

Nine GSK apprentices have been named England's apprentice team of the year after winning the 2017 Brathay Apprentice Challenge. 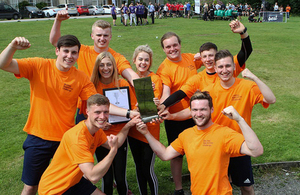 The five-month Brathay Apprentice Challenge saw them compete against teams from the country's leading apprentice employers and training providers. The GSK apprentices battled off tough competition from seven other national finalist teams after proving their logistical, team building and communications skills.

As part of the challenge the team also delivered a community project, which involved creating a series of four short films about the dangers of asthma attacks. The films were made in memory of a little boy, Joshua West who had a fatal asthma attack. The team went on to show the films in schools and sports clubs.

The Brathay Apprentice Challenge, the search for the apprentice team of the year is supported by the National Apprenticeship Service. In 2017, teams reached over 70,000 young people to raise awareness of the benefits of apprenticeships and recruited over 500 new employers interested in offering apprenticeships.

The total of eight National Finalists were selected from 75 teams and 650 apprentices who entered the Challenge. Since January, the teams have worked hard to spread the word about apprenticeships and have visited more than 555 schools, careers fairs and youth groups to encourage young people to consider an apprenticeship. The apprentice teams have also reached out to their local communities and delivered 44 community projects to benefit young people.

"I am happy for me, happy for my team and happy for my employer. It is a great honour for all of us to have won the title apprentice team of the year and have our hard work recognised."

"What an amazing achievement. I am so very proud of the full team. We have watched them be stretched and grow throughout the challenge.

The highlight was seeing them develop from being all about the challenge and winning it to being about making a major contribution to the community in raising awareness of asthma and helping save lives. This is a great recognition of the Joshua West legacy."

"Congratulations to GSK on being crowned the 2017 apprentice team of the year and to all of the teams that have taken part in this year's challenge. Together they have shown the genuine difference an apprenticeship can make.

The new skills and the new experiences these apprentices have gained in the challenge will add to the opportunity apprenticeships provide to earn while you learn, as well as helping the employer grow and increase its productivity.

The hard work the teams have put into the challenge has made real differences to their communities, the next generation of young people thinking about their careers and encouraged more employers to take on apprentices.

They are great ambassadors for apprenticeships."

Get in Touch
If any further information is required on our products or services, please contact us.